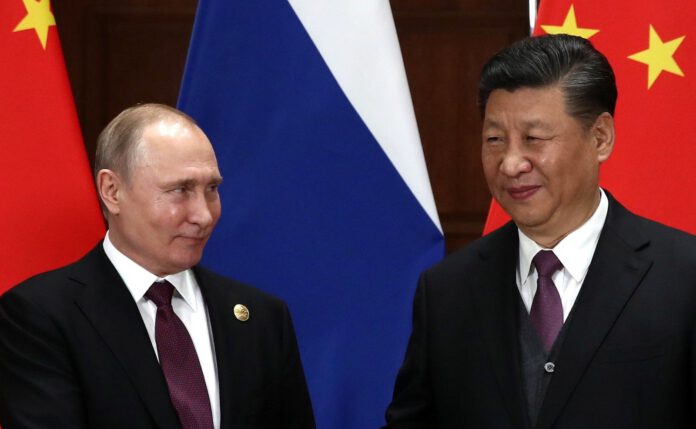 The US President Joe Biden is looking at Russia in the conflict with China, and with major coalition-building, bilateral sanctions, he is further restricting the close ties between Beijing and Moscow. For Europeans in Russia’s neighborhood too, the question has been raised over the years that it does not make sense for the Western world to impose sanctions on Russia so that Moscow moves farther away from Europe and rushes to Beijing.

Looking at the geopolitics of the region and the fiery points of Europe in the Baltic, Balkan and Crimean regions; It is understandable that the strategy of the Green Continent countries to the Kremlin in the current situation is full of complexities and difficulties that are largely related to the strategic confusion in the US foreign policy in recent years. It is clear that US power in coalition-building in the Western system is still more effective than China and Russia, but global developments are not moving in America’s best interests this time around.

Veteran members of the KGB era and the Cold War that are based in Kremlin have been able to influence the public opinion of Western societies and their general elections, as well as cyber actions and based on complete considerations over historical records, and to keep Russia safe, away from the maze of political economics and security alliances of the West.

The new pole that is forming in the world with the economic cooperation of China and Russia can make the structural crisis in the Western liberal system so deep and chronically vulnerable that it poses a much bigger problem than fighting the Chinese uprising.

In this troubled world, the rise of someone like Trump with his destructive remnants in the United States and the world order, along with the political and security structure of Europe, which lacks the format and capacity to influence international crises, is a form of malignancy. There is a kind of malignancy in the liberal democratic structure of the West, which has deepened in the Covid19 crisis with its metastasis.

The Biden government’s main problem in controlling China is that separating Russia from China is not an easy task right now, unlike in the 1970s, when they were effectively separated due to differences with Soviet leaders. It was easy for the United States to get closer to China, whose people lived in absolute poverty in the 1970s.

The success of Biden’s policy is now almost impossible due to China’s economic downturn and strategic cooperation between Beijing and Moscow. Today, the Chinese are not American worker bees. China’s foreign exchange reserves exceed $ 3.2 trillion, and Moscow and Beijing are at the height of bilateral relations, which is unprecedented in the history of their bilateral relations. This historic proximity has so far helped Beijing in controlling international institutions and organizations, and has given Moscow a lot of energy to reassert itself globally and strengthen its military interests and presence in various parts of the world.

The occupation of Crimea and Russia’s military incursions into Syria and Libya are part of the Kremlin’s strategic audacity in the shadow of the US political stalemate and fruitless military spending.
As the China-Russian alliance grows stronger and stronger, the United States is weak in maintaining its existing ties with its allies, seeking only a rift in the deeper Sino-Russian relationship.

The Biden administration hopes to find a clue to the conflicting interests of Beijing and the Kremlin, which are like finding a needle in a haystack. Eventually, a dynamic, self-assured and self-reliant China will struggle in the face of a static Russia. It can be said that unlike in the past, when the initiative in American global policies was taken by American designers and strategists, this time Washington is sitting in the ambush of mistake or conflict of interests of others to gain interests.

On the other hand, the few countries that generally dream of global anti-American-hegemonic ties, without political understanding or historical awareness of US political instability with some countries, wish to form a new pole on the other side of the world to welcome Chinese hegemony in Asia and Eurasia. Such countries, which see the formation of a “strategic alliance” between China and Russia as certain and close, are trying to force themselves to adhere to either of these two countries.

In order to gain a general understanding of the quality of Sino-Russian relations, it may be necessary to briefly dissect the political-historical events and realities in Sino-Russian relations in the contemporary environment in order to determine in advance for such countries that, contrary to their expectations, not only creating a strategic alliance between economic power of China and the military power of Russia is not easy, but also these relationships have geostrategic and historical gaps as well as numerous structural barriers.

As China grows stronger every year, Russia is declining industrially and demographically, and its international position as an exporter of raw materials and weapons has diminished. China is more than ten times the population of Russia and its economy is ten times larger than Russia’s, and with a $ 252 billion military budget in 2020, it has spent four times more on its security than Russia’s military budget, therefore, the balance of power between the two countries does not make sense.

Beijing has imposed its power on the Eurasian region with the One Belt-One Road project, and Russia is the only military power in the region. If the rivalry between China and Russia over influence in Eurasia escalates, it could be the beginning of the end of the partnership between the two countries, given China’s growing power. The Russians, in their sphere of civilization and history, have always looked down on the Chinese and at the same time feared the superiority of the Chinese population on their borders. In the three provinces bordering Russia and China, there are only 6 million Russians, compared to 120 million Chinese. The economic activity of Chinese companies and labor in Siberia is a serious nuisance.

Unlike Russia, China is less dependent on modern American and European markets and technology by acquiring “High-Tech”, and is the top one trading partner with Western countries in economic and industrial development competition. During the economic and financial crisis of 2008, the Chinese tried hard to save the US economy by injecting huge dollars from their vast reserves. As a result, China generally sees its long-term interests in growing cooperation with the United States, Europe, and Southeast Asia; And it does not seek its global future in a strategic alliance with Russia. Russia, on the other hand, lacks the capacity for normal cooperation with the West.

Historically, China and Russia also did not have good experiences with each other. Under the Treaty of Aigun, in 1858 and 1860, the Tsarist Empire of Russia annexed the territory of China under the “Qing Dynasty”, which was under foreign pressure, as much as 5 times the size of Germany, and built the city of Vladivostok (Eastern Conqueror) in the occupied territories. The Russians settled in Manchuria for decades, and in 1955 the Soviets returned the only port of Arthur (in Chinese, Port Lushun) to China.

Stalin did not believe in Mao Zedong’s communist-peasant revolution in China and sought domestic political stability and economic development. Mao, however, considered himself a true revolutionary and the world leader of communism and a rival of the Soviets, and referred to the Russians with the word revisionist, which at the time was considered insulting, and believed that the world communist revolution was from Beijing.

The rivalry escalated to the point where Khrushchev recalled Russian technicians from China in 1960 and ended all Soviet technical assistance to China. China’s industrialization thus lagged behind for decades, leading to further distance between the two communist countries. There were repeated military clashes on the 3,400-kilometer border between the two countries, and even in 1969, for several months, there was a full-blown war between the two neighbors.

Relations between the two countries have improved since 1990. In 1996, the two countries entered into a kind of strategic partnership. The Shanghai Cooperation Organization (SCO) was established in 2001 at the initiative of Russia and China to counter Western alliances; In the same year, a contract agreement was signed between the parties, and finally in 2005, after long negotiations, the borders of the two countries were finally determined and stabilized. In 2014, amid Russia’s isolation that accompanied the occupation of Crimea, Putin forced China to make more concessions.

Russia lifted its arms embargo on China, and delivered them Russia’s most modern fighter jets Sukhoi35, as well as the S-400 missile defense system. In the same year, with the signing of a $ 400 billion contract in Shanghai, Russia’s Gazprom pledged to deliver 400 billion cubic meters of natural gas on a yearly basis to China for 30 years.

But despite these positive developments, the massive Moscow-Kazan high-speed railway project is still not underway, and Chinese investment in Russia’s Far East remains largely stagnant and undecided. Trade relations between the two countries are not as fast as expected, and by 2020 the volume of trade between the two countries did not exceed $ 104 billion, which does not seem significant compared to the $ 560 billion trade volume between China and the United States. The lackes in the political relations between the parties seems to be compensated by Russia’s military cooperation with China and China’s purchase of energy from Russia.

So what became the reason for Russia’s generosity to China was because of the Kremlin’s political isolation in the occupation of Crimea, and it became an opportunity for the Chinese to increase their deterrence power. In its relations with Russia, China wants to show that if it is seen as an enemy by Washington in balancing power, there is the capacity to see the United States as an enemy and Russia as a potential ally in global relations.

From this point of view, it can be said that doubts about the new strategic relationship between China and Russia also seem real. Of course, Beijing-Moscow relations can be considered more than a partnership and lower than an ally, and at best “friendly relations”. Relationships that will no longer be hostile and based on political giveaways that also guarantee the interests of both parties.