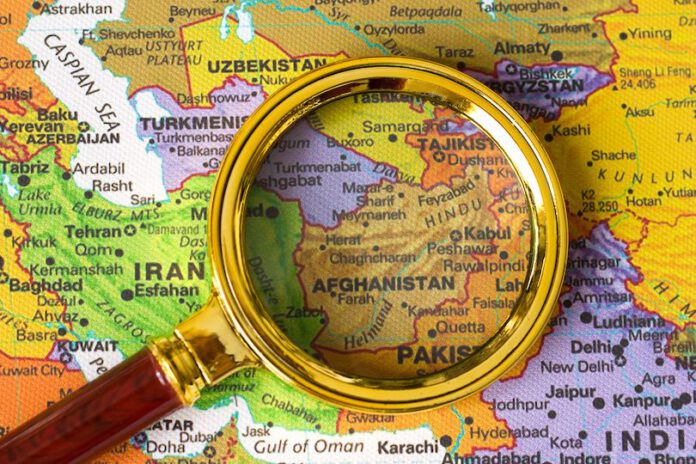 Since the Libyan war, Washington has openly refused to play Europe and its allies in decisions made in the White House, but after Trump came to power and now Biden; The United States does not even need to explain its policy to others and its European allies. As the world has seen, the United States decided to leave Afghanistan without informing its allies.

The United States now considers itself “entitled” and “active” in world politics, especially in the Middle East and Central Asia, given its spending. But the question is, how does this strategic absence strategy work? It seems that the United States now has the role of Victor Frankenstein, who, in order to achieve his goal, seeks to draw a puzzle from the corpse of a country called Afghanistan by creating a monster in this country, but this monster is now negotiating with its creator.

To be able to key the metastasis phase of geopolitical and ideological insecurities in the region.
The metastasis that will take the skirt of China in Xinjiang, the skirt of Russia in Central Asia, the skirt of Iran in its eastern borders, and the skirt of Europe in the new wave of immigrants and also possibly Jihadist terrorists under the guise of immigrants – as the Union’s first threat – and, of course, given its ideological nature, it will establish a new era of Jihadist Salafism in the region.
In the meantime, the Taliban must be viewed from three angles, contrary to existing analyzes, which have remained largely on the surface and unable to see the multifaceted nature of the developments.

First sight ; The Taliban, as a Pashtun ethnic group, has the right to participate in the process of Afghan national sovereignty in the structure of forming an ideological state with sovereignty based on Islamic law.
Second look; The Taliban, as a militant group opposed to the presence of US troops by accepting other terrorist groups on Afghan soil
Third look; The Taliban are at the helm of Afghanistan, or in other words, the Taliban in power and an all-inclusive government.

In the first case, the Taliban, as one of Afghanistan’s ethnic mosaic groups consisting largely of Hazaras, Tajiks and Pashtuns, cannot be removed from the field-operational as well as political scene in Afghanistan. Furthermore, the group’s 20-year lifespan, even after the American occupation of the country in 2001, shows the impossibility of their physical elimination, who are themselves part of the Afghan people.

The second issue concerns the Taliban after the US invasion of Afghanistan. The Taliban have shown that they can absorb enormous forces. It is estimated that there are about 80,000 Taliban fighters ready to serve in the group. This group has been able to provide information-security and logistics support; And Pakistan in particular to continue to exist as a militant group. During this time, they never allowed the Americans and NATO members to settle safely on Afghan soil.

The Taliban, with the possibility of safely crossing the border with Pakistan and traveling to Pakistani territory, make it impossible for US and NATO forces as well as the government based in Kabul to pursue effective operations due to the difficulty of searching in the North Waziristan region and having a social base in Pakistan. During this period, the group was able to finally impose its will on the Americans to leave and dissolve the Afghan government, which was done by increasing the cost of the presence of foreign forces on Afghan soil through a series of military and suicide operations that eventually forced the United States to negotiate its exit without preconditions.

But there is another issue that is less considered in the analysis and far removed from the view of macro strategists; The Taliban at the helm of power and the all-encompassing government that the world is facing today. One of the important points about the Taliban is the group’s close cooperation with al-Qaeda. Al-Qaeda’s presence on Afghan soil can be seen as an unwritten agreement to use the group’s power to counter threats to countries in the region on the one hand and to the Americans and their allies on the other.

The Taliban had turned their territory into a safe heaven for al-Qaeda forces when they were in power, and since they do not have a deep ideological difference with al-Qaeda Jihadist forces, they will always be able to do so whenever they need to turn the balancing power and threaten Western countries and, if necessary, regional countries.

Furthermore, the Taliban’s grip on power and the group’s aggregation of power in Afghanistan’s central government will lead to the share of Pakistan and the Taliban’s Takfiri branches. To consolidate its power, the Taliban is likely to help al-Qaeda, and this could pose a serious threat to a credible threat of insecurity for China, Central Asia and the Middle East. This situation puts the Taliban with the taste of al-Qaeda on the Taliban’s menu.

Another issue is that the Taliban in the current situation is not a government that can be talked to directly. Even in the Taliban’s talks with the Americans and the Doha talks, the group had resorted to its old-fashioned “Domination by Sword” policy. This policy was the approach of the civilian and relatively non-violent Taliban in Doha, Qatar.

But their forces and field commanders did not follow political and diplomatic decisions, and with their militias were able to seize the presidential palace in Kabul sooner than they had agreed with the United States, and take the will of the Afghan government forces to resist and suppress. Given the superior position of the field, this group of Taliban did not see any reason for interaction, even in the short term.

On the other hand, the existence of actors such as Pakistan and Lashkar-e-Taiba, a branch of the Guardians of the Prophet’s Companions ( Sipah-e-Sahaba), and the Guardians of the Prophet’s Companions itself and the Haqqani network based on the Afghan-Pakistani border; It shows that the Taliban is not a single organization and groups can practice their own Ijtihad and not support the diplomatic decisions of the Doha-based leadership or from now on in Kabul. The point is that all groups affiliated with the Taliban, unlike the Taliban of Afghanistan itself, have a Takfiri and strongly anti-Western ideology, which has recorded terrorist acts in Europe and the United States in its name.

This group of Taliban strongly opposes the activities of women in society and has previously carried out horrific acts of targeted assassination of civil society activists, journalists, female singers, judges and university professors. From September 2020 to May 2021 alone, 21 people were killed and about 200 others were sent threatening messages, according to the Afghanistan Human Rights Defender Committee. The killings, which took place in Kabul with the relative silence of the previous government, indicated that the stage was set for the Taliban to advance and that US negotiations with the Taliban were progressing.

If the balance of power in Afghanistan is upset and the balance of power is removed peacefully, we will have to wait in the future for the mass killing of Shiites who are considered dissidents by the Taliban Salafists. Moreover, if human rights activists, civil society activists, intellectuals and opposition forces, and even Afghan contractors working for US and NATO forces, do not find the opportunity or escape route to leave Afghanistan, massacres will not be far off.

The fall of Kabul’s central government and the Taliban’s failure to consolidate its sovereignty in Afghanistan could plunge the country into a protracted civil war and put severe pressure on Europe, particularly in exacerbating the refugee crisis. The arrival of ISIS elements in Europe as refugees could create overlapping circles of Islamist Salafi groups from Afghanistan to South Asia, Central Asia, the Middle East, and as far as North Africa. The networking of these cells and their separate nuclei in different parts of the world can jeopardize the regional security of Europe and even the security of the political and ideological borders of China and Russia.

In the current situation, what the international community needs to pay attention to is the collapse of American political morality and the deprivation of moral responsibility. History has shown that the Taliban is not a group that can be held accountable as a responsible government, and that there is a possibility that the United States will split its work with the Taliban to contain or confront China, Iran and Russia from the Afghan axis, as no country knows about the behind-the-scenes Washington-Taliban agreements.

In such an ambiguous atmosphere, is the world ready to interact with the formation of a Jihadist Islamic Emirate? Is Europe able to withstand the onslaught of a new wave of refugee crisis, including terrorist elements of ISIS and Jihadists? Will China see the growth of the Turkmen Uyghur base inside and outside its territory? Has Russia considered the rise of the Chechen Takfiri Salafis? But the most fundamental question is whether Europe, China and Russia have an answer to the question of what to do with the United States!!!