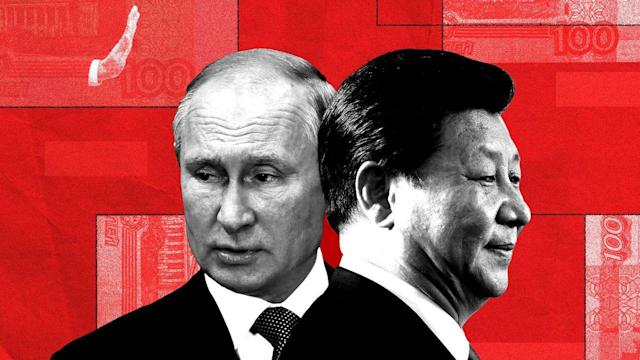 The escalation of the rivalry between China and Russia and the failure of the United States in the costly wars in Iraq and Afghanistan have caused the world of international relations based on World War II and the Cold War to experience many differences. The United States is no longer recognized as the absolute hegemon and the only superpower in the world. In other words, the rise of emerging economic powers such as India and China, as well as Russia’s growing military power, have fundamentally changed the situation to such an extent that all three major powers seek to gain a strategic advantage over each other. The new strategy, especially in the Caucasus and East Asia, with a variety of political and security projects, is an example of these efforts.

On the one hand, the United States seeks to contain and balance Chinese power in East Asia, India, and the Pacific by creating new alliances and treaties with a military approach, such as the Quad and the AUKUS agreement. On the other hand, China is trying to form a coalition of major non-Western powers by approaching Russia and holding joint military maneuvers with it as an alternative to the declining American world order. In fact, all three powers are preparing for further political, economic, technological, and possibly military confrontations.

This year marks the twentieth anniversary of the signing of the Strategic Good Neighborliness and Friendly Cooperation Agreement between China and Russia, which was signed in 2001, during which the two sides agreed to cooperate in various diplomatic, economic and military fields. But the most important point of this ninth treaty is that it indirectly announces a kind of military alliance. In fact, according to this clause, if either party is threatened, the other must immediately and in close cooperation with the threatened party eliminate the threat. A case similar to Article 5 of the North Atlantic Treaty Organization, called the Heart of NATO, was established for the purpose of collective defense and has committed member states to a military attack on one or more NATO member states as an attack on all NATO countries, and all Member states must confront and eliminate the threat.

Although the ninth clause of the military pact between Beijing and Moscow is not considered a military pact like NATO due to its generality and lack of reference to details and interpretable details, its tone undoubtedly indicates a kind of military alliance. In particular, the two countries have jointly conducted several maneuvers in this regard, including the continuous and annual presence of China in Russia’s regional maneuvers from 2018.

However, despite the two sides’ explicit declaration of “strategic cooperation”, these countries are reluctant to raise the level of relations to become a “strategic alliance”. Because the definition of the relationship under this heading has its drawbacks that undermine the benefits of strategic partnership. Hence, both sides now have to pursue an unwritten agreement in which each does not intervene on the other’s most contentious issues. Thus, Russia does not interfere in the affairs of Taiwan and China in connection with Russia’s actions in Crimea.

In other areas of cooperation, Beijing, and Moscow, especially in the last ten years, have become much closer, with China-Russia trade now reaching more than $ 100 billion, making Russia Russia’s largest trading partner. It has also become the most important destination for the country’s agricultural products. The interesting thing is that due to the prevalence of the corona epidemic in the last two years, this volume of exchanges has not decreased significantly and has been very stable. Russia is also one of the two largest exporters of this vital substance to China, exporting about 83 million tons of crude oil. China and Russia are also documenting an agreement on extensive space cooperation and in particular the construction of a joint research station to study the moon, in which Western countries, especially the United States, have no place.

Another clear example of the convergence and closeness of China and Russia has crystallized in the Shanghai Cooperation Organization, which has recently expanded further with the accession of Iran. Although the original idea of the organization was to fight terrorism and extremist Islamism, especially in Central Asia and along the borders of the two countries, over time, with the clever expansion of Shanghai and covering more chapters, the pact is becoming a rival to NATO and transatlantic relations in East Asia.

It can be said that the simultaneous presence of four nuclear military powers, as well as four modern and nuclear armies such as Pakistan, India, China, and Russia in Shanghai, promises that the member countries of this organization or other countries in the Middle East and Southeast Asia can Use the experiences of these four powers in the military and security fields and reduce their potential dependence on eastern countries and the United States.

Also, China and Russia, as the most powerful members of Shanghai, can use the capacities of this alliance in the future and, if the rivalries or confrontations become serious, open a new united front against the United States and its NATO ally. Through this organization, China can also provide security for a large part of the one-lane-one-way project route, which will lead to greater convergence between China and Russia.

However, regardless of this closeness and cooperation, even if the Western outside observer focuses only on the lack of a formal military alliance between the two countries and even looks at the military convergence of the two with suspicion, he should never base his policy on Adjust the strategic separation of the two countries. Thus, the growing strengthening of relations between Beijing and Moscow can play a deterrent role by creating suspicion and fear on the part of the rival or the enemy, and greatly increase the cost and risk of military action against one of them.

Of course, alliances and alliances are not permanent, and countries enter or leave alliances to secure their national interests, but it should not be overlooked that the alliance between China and Russia, given the US pressure on the two The country has no temporary basis, and the pact will last as long as there is intense US competition with the two countries.

In fact, the very existence of Western governments and the behavior of the West, and above all the United States in the field of international relations, has created the need for unity against it. It is obvious that China and Russia, as has been repeatedly stated by the leaders of these countries, neither oppose nor fully agree with the current order of international relations, because they believe that the share of other great powers in the world order and relations between International to be considered; That the United States is definitely opposed to such a thing and will not allow further weakening of the current order and its superior position in the face of the escalation of power between Russia and China.

Thus, as long as there is such a conflict, the closeness between China and Russia will increase day by day and become stronger. Even in the event of a dispute between the two countries, a mechanism such as the Shanghai Agreement can resolve them and prevent friction between China and Russia. Despite the differences of opinion and some conflicts of interest in some areas, the two countries have been able to manage the differences and prevent them from turning into tensions.