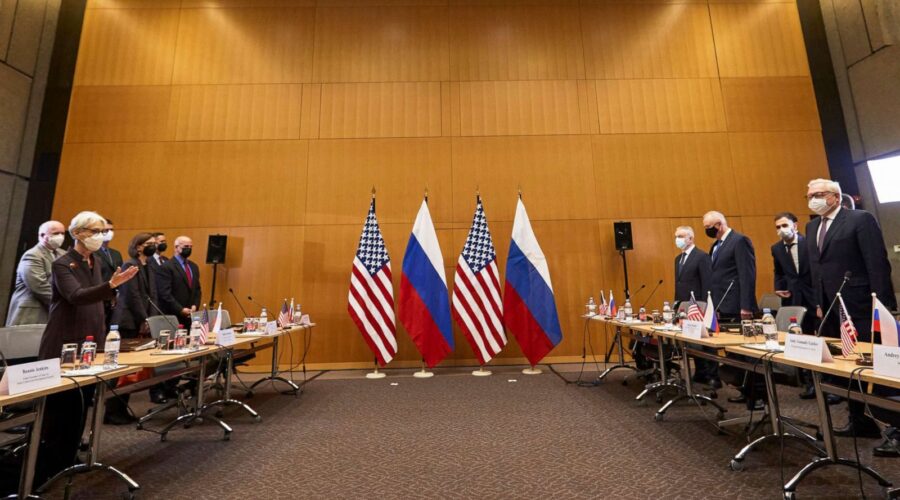 “Impasse, Deadlock” says The Washington Post describing the outcome of the high-level U.S.-Russia talks Monday, with a tone of self-congratulation (we told you so), tinged with wishful thinking.

Yes, wishful thinking. Given the very high stakes, the media is a huge part of the problem, since they keep millions in the dark about the real world and hinder progress toward reducing U.S.-Russian tensions. This should come as no surprise, since the corporate media are part – indeed the linchpin of – the MICIMATT (Military-Industrial-Congressional-Intelligence-Media-Academia-Think-Tank complex that profiteers on war. The Post and other Establishment media are doing their level best – against growing odds – to be consistent.

Consistent: A more ‘charitable’ explanation for media misfeasance can be seen in Ralph Waldo Emerson’s dictum: “A foolish consistency is the hobgoblin of little minds, adored by little statesmen and philosophers and divines.” Emerson was writing about people who allow their ideas and opinions to be dictated by what they used to think. He noted that little minds are too afraid of change – even when contradictory data suggests a better, more accurate idea.

So, after Monday’s talks in Geneva, little minds at The Washington Post, for example, were happy to run this headline: Russia-U.S. talks hit impasse over NATO expansion, but Moscow says the situation is not ‘hopeless’. In my view, those little (and/or warmongering) minds miss the the significance of what just happened in Geneva. Here’s how the headline should have read: Geneva: Agreement to Discuss Where Missiles Can Be Emplaced.

As Emerson reminded us, hobgoblins don’t find it necessary to keep up on significant events. This is made still easier for U.S. media stenographers who, in normal circumstances, can rely on “The Memo” from Washington with the needed guidance. What has been abundantly clear since Dec. 25, 2021 is that “mainstream” corporate media have not been fed the guidance without which they simply do not know how to spin major stories.

They were at a loss, for example, to explain Moscow’s announcement on December 25, 2021 that 10,000 Russian troops had been pulled back from areas near Ukraine. And editors who depend on credulousness among their readers/watchers apparently considered it too much of a stretch to take this one off the shelf: “There is always someone who doesn’t get the word” – this time 10,000 troops ended up going the wrong way for the ‘planned invasion’ of Ukraine.

Then out of the blue came President Vladimir Putin’s urgent request for a telephone conversation with President Joe Biden. That took place on Dec. 30 and set the dates and – now we know – at least one highly important term of reference for the bilaterals yesterday in Geneva. On December 30, 2021 one could only guess at the reasons behind Putin’s abrupt request, but those who took the trouble to look at the Kremlin’s immediate readout could figure it out without super-analytical skills:

On December 30, Vladimir Putin had a telephone conversation with President of the United States of America Joseph Biden. The conversation focused on the implementation of the agreement to launch negotiations on providing Russia with legally binding security guarantees, reached during their December 7 videoconference. … [at this point come a few standard, boilerplate sentences] … The presidents agreed to personally supervise these negotiating tracks, especially bilateral, with a focus on reaching results quickly. In this context, Joseph Biden emphasised that Russia and the US shared a special responsibility for ensuring stability in Europe and the whole world and that Washington had no intention of deploying offensive strike weapons in Ukraine.

The media apparently did not get the customary guidance Memo on this, and so they ignored it. So did the pundits who feed only on mainstream media, even though Putin’s top adviser on these matters, Yuri Ushakov, immediately told the Russian media:

“Biden made it clear that the US does not intend to deploy offensive strike weapons in Ukraine.”

According to The NY Times Monday afternoon, “The American side raised ideas about where US and Russian intermediate-range missiles are located, Ms. Sherman said, and the United States made clear that it is open to discussing “ways we can set reciprocal limits on the size and scope of military exercises and to improve transparency about those exercises.”

Earlier, we had suggested that the Biden promise to talk about locations for offensive missile emplacement was an opening “Quid” for the talks. It seems now that this turned out to be the case. In due course, one can expect a sizable Russian troop withdrawal from areas near Ukraine. (And, in all likelihood, this time corporate media will receive guidance as to how to play it.)

US chief negotiator, Deputy Secretary of State Wendy Sherman gave remarks to reporters after the Monday talks: “If Russia stays at the table and takes concrete steps to de-escalate tensions, we believe we can achieve progress,” Sherman said. …Sherman also said the US told Russia that it is open to discussing the future of certain missile systems in Europe related to the former Intermediate-Range Nuclear Forces (INF).

Sherman added the US is ready to continue discussions on bilateral issues and said her Russian counterpart, Deputy Foreign Minister Sergei Ryabkov, agreed that “negotiations on complex topics like arms control cannot be completed in a matter of days or even weeks …”