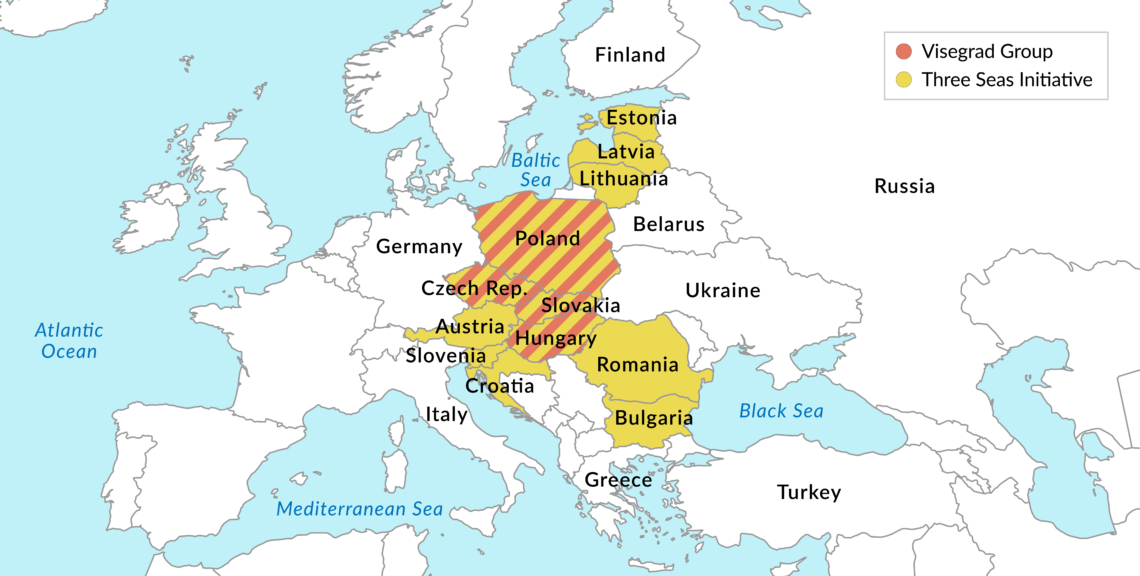 Central Europe was always a region of great importance for the entire continent. Ranging from the Baltic Sea in the north to the Adriatic and the Black Sea in the south, its different cultures are bound together by trade routes as well as common traditions and interests. In old times the kingdoms of Hungary and Poland (the Polish-Lithuanian Commonwealth) shielded Europe to the east and southeast. They were also major trade hubs. During the era of exploration and overseas colonization, the European economic center of gravity shifted to the Atlantic. Central Europe became more isolated and had to contend with growing Russian influence. These nations found themselves surrounded by emerging great powers.

The Austro-Hungarian Habsburg monarchy united and protected some of these nations. Poland was partitioned and ruled by different empires. After World War I, the nations of Central Europe gained independence only for some to lose it to Nazi occupation soon after. After World War II all of them fell under the Soviet yoke. The only exception was modern-day Austria.

Fortunately, the implosion of the Soviet system freed the countries of Central Europe, which eventually became members of the European Union. Their populations, determined to make the most out of the support they received, became successful members of the Union, greatly contributing to its overall progress.

Unfortunately, the importance of Central Europe is not sufficiently recognized in Brussels and in certain member states, which often resort to unjustified paternalistic attitudes. Arbitrary cliches are bandied about: these countries are not mature enough for democracy, they are fully dependent on transfer payments and do not share the values of the Union. It is not the purpose of this text to analyze these accusations in detail, but such generalizations have to be contested. While every country – not only in Central Europe – has its shortcomings, these claims fail to take into account the region’s huge development achievements, its responsible use of EU funds and the benefits of its success for the whole of Europe.

But there is another situation that challenges the area. The region is now facing a dilemma between security concerns on one hand and economic interests on the other.

After the implosion of the Soviet Union, Russia first appeared to be declining in importance on the world stage. The West made a fundamental mistake by adopting a patronizing attitude in response. But then the country regained some of its strength and assertiveness, once again aspiring to big power status. Europe’s clumsy attempt at including Ukraine in the European Eastern Partnership gave Moscow a pretext to occupy Crimea and to support “volunteer” soldiers in Donbas in 2014.

While the occupation of Abkhazia and South Ossetia since 2008 triggered little reaction in the West, Crimea and Donbas were seen as a breach of international law. The West responded with strong words, but the only consequences were economic sanctions.

The violation of Ukraine’s territorial integrity gave rise to grave concerns in Central Europe, especially in Poland, Romania and the Baltic states. Belligerent voices grew louder, and NATO reinforced its presence along the eastern border.

But because of the economic sanctions, Central Europe lost a trading partner in the east. This is not to be neglected, especially since the measures did not bring the expected results.

The region is now facing a dilemma between security concerns on one hand and economic interests on the other. The problem is made worse by differences in opinion. Central European countries are not sufficiently aligned to signal their interests to Western Europe and Brussels or present a common front to Russia. With regard to security matters, they understandably perceive the United States as their main partner.

The sanctions hurt Central European countries the most. Germany was also hit, although not as much. Western and Southern Europe were only marginally affected, and the U.S., not at all. Washington considers Moscow a strategic rival, but has no economic interest in the situation. The old Brzezinski doctrine prevails, requiring that the U.S. do everything to prevent closer ties between Europe and Russia. The principle dates back to the Soviet era, when Moscow aimed to spark a worldwide Marxist-Leninist revolution. This is no longer the case. A determined Central Europe could come together, and address fears of potential aggression meant to reassert Russia’s status as a major power.

From Utopia to Reality

Despite these issues, Europe must maintain relations with Russia so that countries on the eastern border can resume good economic and trade relations. Central Europe remains in a crossfire of EU, Russia and U.S. interests, which are being pursued to the detriment of the region.

The countries of Central Europe could come together and join forces. The creation of the Visegrad Group, an association between the Czech Republic, Hungary, Poland and Slovakia to further mutual economic interests, was a step in this direction. Unfortunately, despite friendly relations between member countries, the organization has yet to prove its effectiveness. A strong, aligned Central Europe would have a better position in Brussels.

The Three Seas Initiative provides an interesting alternative. The informal association comprises the four Visegrad countries, the Baltic states, Austria, Bulgaria, Croatia, Romania and Slovenia. The group could benefit from more collaboration in economic matters, infrastructure, energy and security and defense. It could use the synergies offered by the shared river system, port access and pipelines. It should not compete with the EU  but strengthen the area and improve the balance between east and west within the Union.

A strong, aligned Central Europe would have a better position in Brussels, independently handling relations with Washington and standing up to Moscow. Trade and investment would be welcome, but the region’s integrity would be respected. Open trade to the east would boost economies and Central Europe would no longer be wrongly considered “peripheral.”

This might sound like an unrealistic vision. But the initiators of the Three Seas Initiative saw the potential of this idea. To realize it, there must be a common understanding that all partners are equal, regardless of their size. This principle helped turn several “utopias” into a reality – including the EU and the U.S.